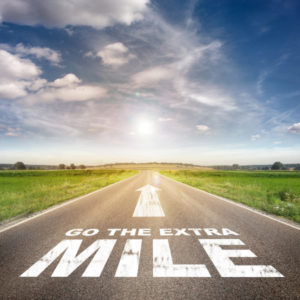 In the article Giving Firms an ‘E’ for Effort: Consumer Responses to High-Effort Firms by Andrea C. Morales, assistant professor of marketing at the Marshall School of Business, University of Southern California their research indicated that customers reward companies that are seen to go the extra mile — even if they don’t personally benefit from that effort. In fact, customers are willing to pay more for a product, frequent one store rather than another, and, in general, have a more positive impression of a company or brand that is perceived to put in more effort.

Andrea’s explanation is that customers recognize that effort is a controllable behaviour, and as a result, feels gratitude toward firms that work hard.

Customers reward companies that go the extra mile, even if they don’t personally benefit from the effort
Powered By the Tweet This Plugin

It reminds me of a review an advertising agency got from a client (our customer) where I worked many years ago. In that review the client was very critical of the creative product and lukewarm on the media and production. However, they were very positive about the account service team because, in their words, “we worked so damn hard”.

They acknowledged that they were not always getting the level of service they expected, but were willing to be somewhat forgiving because of the obvious effort their daily account team was expending on their account. They gave us time to address the issues while putting senior management on notice that something had to be done.

According to the researchers, customers can view a company’s outstanding efforts as either general or personal.

We all know that personal wins because of the emotional connection. However, the interesting notion is the halo effect created by doing a good deed for someone else. My sense is that it is driven by the belief that the company (or person) would do the same for us in a similar circumstance.

I think this concept applies to personal behaviour as well as company behaviour. So demonstrate you are making the effort even if you can’t satisfy your customers need. They will recognize your efforts and appreciate and reward you for your attempt.

For more information about having Bill speak about this topic at your next event, visit Kickass Keynotes