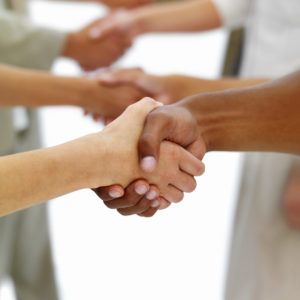 Leaders understand that to achieve goals, it’s important to have everyone working in unison. If they all have different goals, the only result you’ll get is chaos. Here are four reasons why teamwork makes the dream work.

The Sum is Greater Than the Parts
If the team has a common objective, everyone should be working to achieve it. In a supportive team environment, everyone makes contributions based on their unique skills. They don’t measure how much each has done to help the common goal.

The team is stronger than the sum of its members because there are more skills available, so weaknesses can be counterbalanced resulting in the team accomplishing more than any individual could achieve on their own. There’s no room for individual egos because everyone has an unselfish, common goal. When the team succeeds — everyone in the team shares the glory.

You Only Fail If You Stop Trying
A team can support each other through the failures and disappointments as well as the successes. Failures are only reasons why things didn’t work. An individual may find it hard to try again but the team morale and support will enable anyone who stumbles to carry on and try, try, try again. Without failure, there would be no way to measure success.

It’s important to recognize and admit mistakes because only then can you move past them and improve your learning curve. As your team celebrates accomplishments, pride builds up and the team grows even stronger. Eventually, there won’t be any stress if mistakes or failures do occur because the team recognizes that a failure simply demonstrates what doesn’t work — so they can continue to narrow the options until finding something that does work.

Leaders understand that to achieve goals, it’s important to have everyone working in unison
Powered By the Tweet This Plugin

Recognize Your Full Potential
As individuals; people have a lot of limitations. Each person is good at some things and bad at others. However, when you’re part of a team, it becomes easier to recognize people’s full potential because one person’s weakness is someone else’s strength. It’s the combination of these strengths that sees teams make powerful, forward progress towards reaching all objectives.

Being part of a supportive team gives everyone the ability to manage their weaknesses by learning from each other to mutual benefit. One team member may be an excellent administrator but a lousy salesperson. Another may be great in sales but struggles with balancing financial records. By supporting each other, the team gets much stronger as a result. “Use not only all the brains you have but also all the brains that you can borrow.”

Leaders are just Part of the Team
Regardless of whether the leader is a team leader, a junior manager, a senior manager or the CEO of the organization; you’re just another team member. Of course, your role could be considered as different to the rest of the team, but each team member has their area of responsibility and so it really isn’t that different. If you don’t do your job well, that lets the team down in the same way as if another team member lets the rest down.

A true leader carries the attitude that says “I’m part of the team. I just happen to be the one in charge.” It doesn’t mean the leader can accomplish the goals on their own. That’s why teams are created in the first place.

Of course, the leader has to exercise a certain level of authority at times to ensure the team is functioning correctly and at peak efficiency. But the rest of the time you’re just “one of the team.”

Are You A Leader or a Manager?

Leaders and managers must work together because they’re like the two hemispheres of the human brain.

The left hemisphere is the management department and looks after logic and rational thinking. It deals with tangibles, order, and control in daily life.

The right hemisphere is the leadership department where creative, emotional thinking happens. It can see the bigger picture; it focuses on imagination, intuition, possibilities and other soft skills.

Together these two segments make up a whole and when they work together, there are no boundaries to the available possibilities.

Now you have a set of 6 articles that highlights some of the differences between leaders and managers — and why having both roles filled is so important to the successful running of any organization.

For more information about having Bill speak about this topic at your next event, visit Kickass Keynotes.